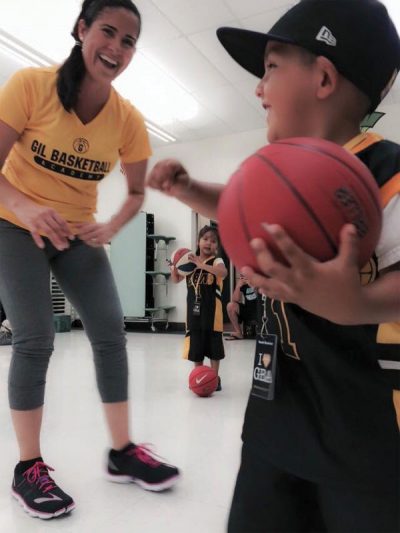 As a first generation immigrant born in Mexico, Amparo Jauregui-Saldana grew up learning daily about struggle and sacrifice.

Thirteen members strong, the Jauregui family arrived in Madera by 1982, when Amparo was just 8.

“The emphasis of working hard for a better future and education was a daily account in our home,” said Amparo, whose father followed the seasons as a farm laborer.

The longtime coach and board member for Gil Basketball Academy grew up with enough siblings to play 5-on-5 all day long. But there was little time for sports.

“My older brothers and sisters set a high example by being able to work and/or attend school at the same time,” she said. “We all worked through our high school years. This meant we learned about commitment and dedication, but also sacrifice.”

For Amparo, instead of participating in after-school activities, she would work after school, returning home by 9 p.m. “to continue working through midnight, complete my homework so that I can attain my goal of pursuing higher education,” she said.

She graduated from California State University-Fresno in 1999, majoring in Psychology with a minor in Biology. “My education gave me a deep sense of wanting to contribute to my community.” she said.

Amparo came to Salinas in 2008 through her husband, who grew up there and graduated from Alisal High School. With two young boys to raise, they found in GBA a second family “that has helped us find a deeper sense of community,” she said.

The family began to integrate with the GBA’s philosophy of giving back, and Amparo soon became a volunteer, coaching the 4-5 age group. GBA gave her a sense of confidence that allowed her to grow. “I began to find a voice to advocate for our youth, through organized groups such as the School Site Council Committees and Alisal High Boosters Parent Club,” she said. Amparo also became a GBA board member and serves as trustee for Santa Rita Union School District.

As an elementary school teacher, Amparo emphasizes the importance of education to her students, something she appreciates about GBA. The academy’s mission not only shapes youth into future leaders, but “it also gives adults an opportunity to be more involved in their own children’s lives, to instill good citizenship, and teach them give back to their community” She believes the group of adult volunteers makes GBA special. “We all are from diverse backgrounds, but with a common goal to empower, expose and give our youth greater opportunities that many of us didn’t have the luxury of being a part of as kids,” she said.

Since she was unable to participate in group sports at a young age, Amparo was surprised to witness how being part of a team creates such unity.

“This is exemplified by how we support each other through the years,” said Amparo, who recalls how other GBA parents helped her as she pursued her teaching credential, taking her boys to games and practices when she couldn’t.

And traveling to New Zealand, Costa Rica, Dominican Republic, Italy and Mexico provided a unique world view that has taught our players how to treat people despite their backgrounds with respect and Kindness.

“But that meant we have to work hard through the years as a team to fundraise and give kids who had never traveled outside of Salinas that opportunity they would not have had otherwise,” she said.

She has seen firsthand how GBA impacts the life of kids through her two sons. “They not only have learned how to balance a life of multiple sports, excelllence in academics, and healthy living, but they also have learned to become young men of good character,” she said.

After being with GBA for 10 years, Amparo has made lifelong friendships. “We support each other and they help give me confidence that I can continue to be a voice for my community. It takes a village to raise our children and through this organization we learn to look beyond our household, give back to others, and help them find their voice”