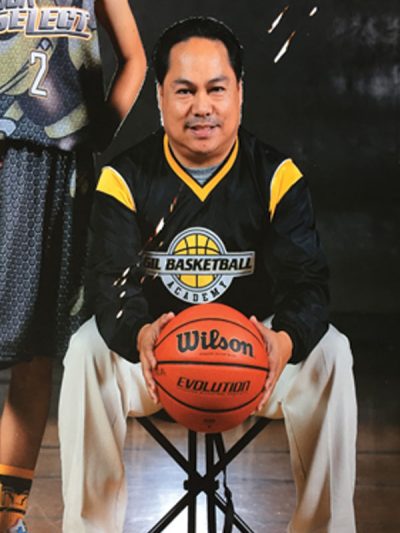 A good coach can inspire a child for life, and no one believes that more than Joey Ramos.

Born in Lapaz, in the Philippines, Ramos came to Soledad with his parents and three siblings when he was just 6 months old. “My parents wanted to give their children a better life with more opportunities,” he said.

An extremely shy child, Ramos discovered basketball in the fourth grade. “Our coach, Mr. Godoy, would coach us from his kind heart,” he said. “We practiced after school three days a week and he personally would drive us to Salinas to play on Saturdays.”

The experience had a huge impact on Ramos, who today lives in Salinas and coaches two GBA select girls teams.

“Playing with a team made me open up and feel comfortable with other people, and has made me become the person I am today,” he said. “It helped with my social skills. To this day, I’m always happy and excited to meet new people.”

In 2002 Ramos was asked to help as an assistant coach for his niece’s basketball team. “That’s where it opened up a new adventure for me to coach basketball,” he said. “It was what I needed to share my love of the game and help other kids that loved the game, too.”

In 2011 he coached his nephew’s team for Steinbeck Elementary in Salinas. Aside from his GBA work, Ramos currently coaches the 7th and 8th grade girls teams at Gavilan View Middle School.

His experience with GBA began nine years ago when he was introduced to GBA co-founder Jose Gil.

“Coach Gil opened up new experiences,” Ramos said. “I could not imagine working with large groups of kids, ranging from kindergarten to high school. It opened up new competitive experiences with GBA select travel teams. It’s all had an impact on how I coach.”

For Ramos, the most rewarding aspects of coaching have happened off the court.

“It’s all about preparing them for the next level of their game, sure, but also in life,” he said. “To use the same elements of respect, commitment, dedication, passion, and the hunger to learn more in everything you set your mind to.”

Ramos is grateful he’s able to support his community, and help open doors for a better future. “Their growth in becoming young adults earns them the same respect, commitment, dedication and the passion they have experienced learning the game and becoming leaders themselves,” he said.

In the end, it’s all about the love of a game that brings to participants many bonuses.

“The excitement I see in our youth, learning together, meeting new friends, having fun, has been the most rewarding,” he said. “Their big smiles are what fuels me!”