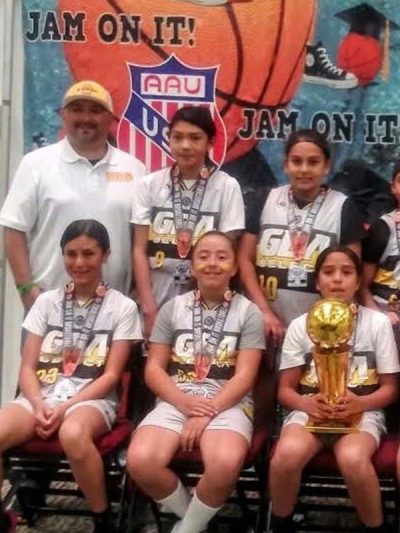 Marcus Medina works for Monterey-Salinas Transit in the maintenance department, making sure employees have all the necessary tools and equipment.

During his off time, he does the same for local kids as a Select Coach for Gil Basketball Academy. Medina makes sure his athletes have all the tools they need — both on and off the court.

“Being a part of a team is no different than being a part of a department at work,” he said. “Coming to MST, I looked at where I can help my department with my skills. I identified where the help was needed and made it my job to improve the process. Having that confidence comes from being on a team sport.”

It has also helped the 37-year-old father of four with time management. “I had a coach once tell me if practice starts at 8 a.m. and you show up at 7:59 a.m., then you’re late. You always show up at least 15 minutes early. So now I keep the clock in my truck 8 minutes fast so I will never be late.”

Such life lessons have an important place on a team, Medina said.

“I knew, once I graduated high school that I was going to be a coach one day,” he said. “The knowledge that was shared with me, I felt it was my duty to pass it along to the next generation.”

For Medina, the most rewarding experience about coaching is having a kid who has never played before. “Seeing the growth throughout the season, and if that player comes back the next year, tells me I did something right,” he said. “Being able to share my love and having players pick up the same love from my coaching is priceless.”

In the end, Medina knows that GBA is about more than basketball.

“They really push the importance of education,” he said. “Taking kids to college field trips, showing them it’s possible for any one of them.”

As a child growing up in Salinas, Medina admits to not always making the right decisions, and at times heading down the wrong path. But it was basketball that always brought him back.

“As a Mexican-American teenager, I didn’t want to end up on the dropout statistics,” he said. “I accomplished what I set out to do in high school, which was to play basketball and graduate.”

Medina got his love for sports from his father, an accomplished wrestler and baseball player. Growing up in the 1990s, though, Marcus gravitated to the star power of NBA icon Michael Jordan, and attended Jordan’s basketball camps at UC-Santa Barbara.

“I would work on my game every day in my backyard, talk to myself, come up with game situations and really studied the game,” he said.

Attending Jordan’s camp at age 12 was a dream come true, but it almost didn’t happen. “My mom took me to the bus station, and I cried,” Medina said. “I didn’t want to get on the bus. She reminded me that it was my dream to meet MJ and that everything would be all right.”

He met his idol, played in front of him, and learned a valuable lesson in the process.

As a child, Medina played countless hours of basketball on public outdoor courts. Today it’s not the same. Some of those same courts are not as safe as they used to be, and most of the players there are adults.

“GBA academy nights give the kids a safe place to play basketball and work on their skills,” Medina said. “As a coach for GBA, I really hope we are making a difference, and hope one day maybe these kids will come back to this community to lead others. They are our future, and from what I’ve experienced, we have a bright future with our GBA members.