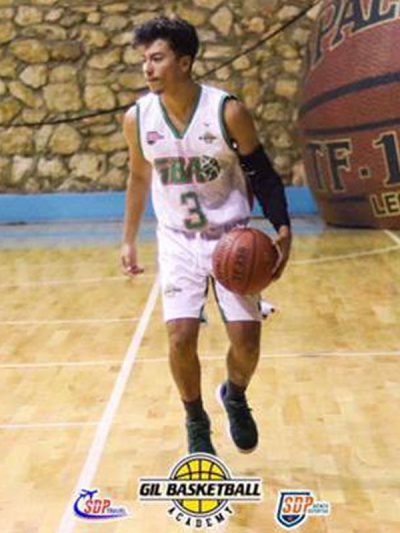 Eduardo Rodriguez is only 17, but has already learned one of life’s great lessons.

“I don’t see failure as failure, but as lessons that will help me improve and grow,” he said.

He learned that by playing basketball, and by being accountable as a teammate. Any loss, or setback, became a learning experience, an opportunity to practice techniques and perfect performance.

“Without basketball I wouldn’t be the person I am today,” said Eduardo, a senior at Alisal High School and 10-year member of Gil Basketball Academy.

One such setback occurred during his sophomore year when he tore a ligament in his left elbow during a football game. Fear and uncertainty followed.

“The anxiety increased when I learned that my tear required surgery,” he said.

Although the surgery was successful, he had to undergo physical therapy for 10-12 months in order to get his full range of motion back. “My will was tested when it came to healing,” he said. “I was in constant pain. I wore a cast, making it difficult to feel comfortable when learning or doing homework. School was also a challenge because it was difficult to open my locker and get my books, typing on my computer with only one arm.”

He also lost out on a season of sports.

“I fell into a depression because I felt that I had lost a part of my identity,” he said.

Surrounded by his family, his friends and his teammates, Eduardo learned about unconditional support.

“Because of this, I was able to succeed academically and athletically, resulting in a speedy recovery,” he said. “I learned to appreciate the simple tasks in life and I learned to develop mental toughness and grit. And I became a stronger athlete and an even better student.”

During his senior year, the 5-foot, 8-inch shooting guard was especially good behind the 3-point line. Eduardo started playing at age 5, winning numerous awards along the way, including earning a place in the Central Coast All-Star game and earning all-star status at Michael Jordan’s basketball camp in Santa Barbara.

Beyond all those achievements, Eduardo has built so many memories away from the court. Through GBA he’s traveled to far-flung places, from Las Vegas to New Zealand to Italy and more.

“Basketball has taught me many life lessons,” he said. “It has taught me how to work with people and have good communication, since you play with a team not just by yourself.”

GBA also stressed the importance of an education (it helped that Eduardo’s parents serve on the GBA board).

“My parents have always told me about the importance of an education because it’s what changed their lives for the better,” he said. “They have shown me that with a college degree I can achieve a better life with better job opportunities.”

Eduardo will attend UC Davis straight out of high school. He plans to study Cinema and Digital Media, with an eye toward a creative career in video editing and production.

When he leaves, he will feel good about helping others in his hometown of Salinas.

“Another opportunity that GBA gave me was being able to be a mentor to the youth of GBA by being a coach,” he said. “Helping these young kids has taught me how to be more patient. Through GBA I learned the importance of giving back to your community in order to make it a better place.”