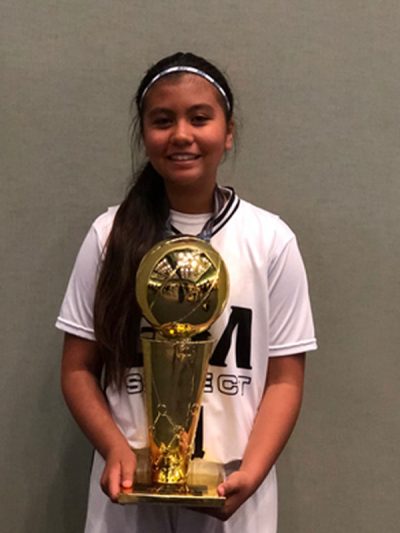 In many ways Isabella Gonzalez has two families.

The 13-year-old lives with her two loving parents, two older brothers and her nana in North Salinas. Away from home Isabella experiences another close-knit environment as a member of Gil Basketball Academy.

“Because of GBA, I have another family,” she said. “It has helped me become a team player, and taught me to always work hard and to never give up. I love playing basketball and I think, without it, I wouldn’t be as motivated in life.”

The 5-foot, 1-inch shooting guard started playing basketball at the Rec Center at age 6, and joined the GBA Select Team two years later. This past season she averaged 15 points, 8 rebounds and 7 assists.

But it’s what happened off the court that affected her so profoundly. Sports have a way of creating a sense of uni­ty, and that showed when Isabella’s mother Susie was diagnosed with breast cancer.

“I was in kindergarten, and as a 5 year old I was frightened that I was going to lose my mom,” she said. “It was so difficult to see her after her treatment and especially seeing her in the hospital. I would cry myself to sleep every night and also used to cry at school.”

Even now, every time her mom leaves to see her doctor at Stanford for a checkup, Isabella feels anxious and afraid that the cancer will return.

“It’s making me a strong person like my mom,” she said.

During her mom’s treatments, when she was really sick, “my GBA family made me feel like there was hope,” she said. “Some of the parents used to give me and my brothers rides to Stanford Hospital so we can see our mom. They would even bring food and let us stay at their houses, or took us places so my mom could rest.”

GBA also allowed Isabella to experience other cultures in different parts of the world.

“I’ve been to all the world tours that GBA has gone to,” she said. “I’ve been to New Zealand, Costa Rica, Dominican Republic, Italy and Mexico.”

In many of those countries, Isabella interacted with kids experiencing profound, daily life challenges, and that provided her a life lesson.

“Being in a foreign country, I have seen kids that aren’t as fortunate as I am, so my GBA family and I decided to give out some of our shoes and other things to them.”

The seventh grader attends Bolsa Knolls Middle School, and one day plans to attend a 4-year university to study in a medical field — and hopefully continue to play basketball.