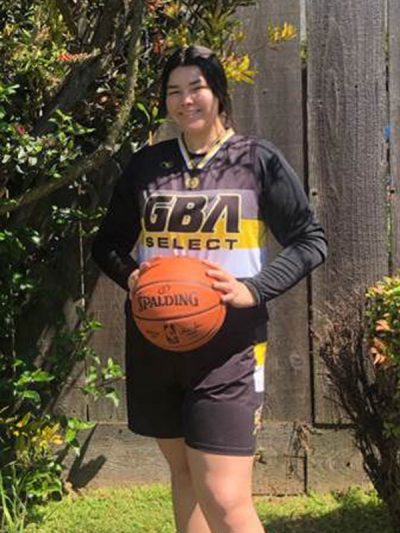 On the first day of 7th grade, Jayden McBride’s father gave her some profound advice: “When in doubt, just smile through it and go with the flow.”

“It was really hard for my mom and me,” she said. “It really took a toll. I was shocked and sad, but I tried not to cry around people because I wanted them to see how strong of a daughter my dad raised.”

Jayden remembers her father as a loving, supportive parent, a best friend, and an encouraging coach on the basketball court.

“I knew that he wouldn’t want to see me be sad,” she said. “He was very positive and the type of person to crack a joke to make people laugh even during the most serious times.”

So she took his advice. “Instead of being sad over what had happened, I try to look back at all the amazing times I had with him,” she said.

She continued playing on the Gil Basketball Academy travel team, thanks to a scholarship extended by GBA co-founder Jose Gil.

“I can’t even explain how much that helped my mom and me,” she said. “GBA has not only helped me, but also many others in countless ways.”

Jayden’s goal is to attend San Diego State University. She doesn’t know her field of study yet, but “I know that I want to help people like how people have helped me in the past,” she said. “Probably something in the medical field.”

Basketball has always been a huge part of Jayden’s life.

“I started playing ever since I could walk,” she said. “At age 4 my dad decided to coach me and others at the YMCA. My dad was basically my coach for every sport I played when I was small.”

At 5-foot, 9-inches, Jayden is a natural center, but is athletic enough to play multiple positions. She received the MVP award in both her 7th and 8th grade seasons. Her freshman year at Salinas High she scored 102 points and earned the offensive player award. This year for the junior varsity she received the most inspirational award, voted on by her teammates.

“That was probably my favorite award because it means so much to me that I can inspire someone without even really realizing it,” she said.

Jayden remains grateful for basketball and everything that the sport has given her.

“The amount of hours, sweat and hard work that I have put into basketball opened up a whole new world for me,” she said. “I learned how to really push myself and not let the worst get to me.”