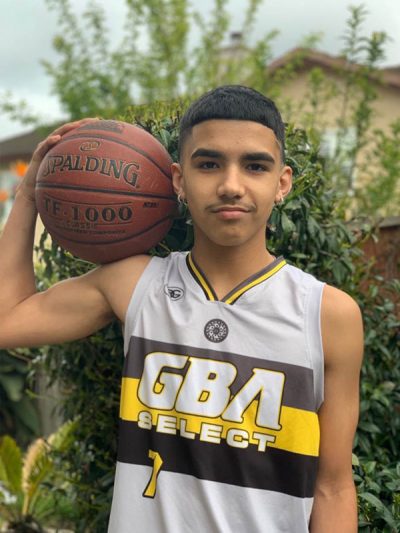 Wedged into the southeast corner of California, between the Mexico border and the Colorado River, the city of Calexico offers limited opportunities beyond seasonal farming and government work.

As a fifth-grader, José David (JD) Solis didn’t understand the reasons behind his parents’ decision to pick up and move the family 525 miles north to Salinas.

Today, JD is 16 and a sophomore at Alisal High School, and fully recognizes the relocation as a turning point in his young life.

“Now I look back and realize that it was actually a blessing to move here,” he said. “The number of opportunities I receive here is higher than if we had stayed in Calexico.”

One of those opportunities came through Gil Basketball Academy. At first JD found it difficult to find friends, and to assimilate into his new environment.

“It was very different from Calexico, so just adapting to the city and everything was challenging,” he said.

“It opened so many doors for me,” he said. “I’ve met so many new people and created so many new friendships. I think my favorite thing in GBA is, of course, being able to play with all my friends, but it’s the bond we all built at the academy. It’s all one big family on and off the court.”
Through Gil Basketball Academy’s select travel team, JD has ventured to far-flung places — including Mexico and Italy. What’s more, GBA’s emphasis on education reveals an often-obscured path to college.

“My goal is to attend a nice college and play ball,” he said. “With a good education you can do anything as long as you put your mind to it. GBA prioritizes that. What happens in the classroom always comes first.”

When it comes to his own education, JD gives full credit to his parents. His mother works for Opportunity Fund (providing loans to low- and moderate-income immigrants, women and underserved small business owners). JD’s father is a freshman AVID (Advancement Via Individual Determination) teacher at Alisal High, helping prepare students for success beyond high school.

JD has a sister in fifth grade and a brother who is a senior at Alisal — and both play for GBA.

“Playing basketball has helped make me into the person I am today,” JD said. “It has taught me a lot, on and off the court.”

The 5-foot, 9-inch shooting guard was part of the 2019 junior varsity team that went 20-4, and was called up late in the season to help the varsity squad in the playoffs.

“One of the most important things I learned from the game was that failure is a way of life, and you shouldn’t hang your head or feel sorry for yourself,” he said. “Being a part of a team made me realize that you can’t do everything on your own.”

Without his immediate family and his GBA family, JD said he would be completely lost.

“I have no clue where I’d be right now,” he said. “I don’t think I would be on the streets or anything because of my amazing parents. They’re always there for me when I need them, they always believe in me and they wouldn’t let me throw away my future.”

JD said GBA taught him how to love his community and be more appreciative of the things he has in life.

“It really is one of the best things to happen to me and this city,” he said. “It helps the whole community, but especially kids who don’t have that much support at home. It keeps kids active, here playing ball and not on the streets.”