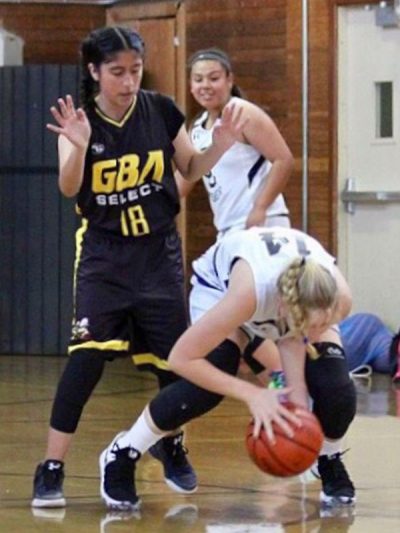 When Natalie Cortes first picked up a basketball in the fifth grade, she found even the simple act of dribbling the ball extremely difficult.

She almost gave up the sport that first day. But she refused to give up — a trait that became a huge part of the 14-year-old’s personality.

“After many years of practice and determination, not only did I learn how to dribble, but I also learned how to do many other skills, too,” she said.

Once she joined Gil Basketball Academy, she fell in love with the game, but at one point almost had to give it up entirely.

“My parents couldn’t afford me playing basketball in GBA Select because we had too many other things going on,” she said.

So Natalie took it upon herself to email her father’s boss to explain the situation. “Because of that I got sponsored so I was able to play again,” she said.

A freshman at Alisal High School, Natalie lives in Salinas with her parents, 12-year-old brother and two 6-year-old twin sisters.

A 5-foot, 2-inch point guard/shooting guard, Natalie has learned so much from basketball.

“It has helped me gain so much,” she said. “For example, being part of a team for all these years has shown me the value of teamwork, hardwork and determination, and paying attention to every detail. This has helped me in my life to become a better person mentally and physically.”

Through GBA, Natalie has learned the value of education, and her goal is to attend a university on scholarship. Her career choice? “I don’t know what it is yet, but one thing I do know is that an education will get me places in the future.”

Natalie credits Gil Basketball Academy for helping her on and off the court.

“Overall, GBA has opened so many doors for me regarding basketball. Thanks to GBA, I was recruited by NCSA (Next College Student Athlete), which I unfortunately didn’t join for many reasons,” she said. “They helped me not only to gain more expertise in basketball, but to become a better person.”