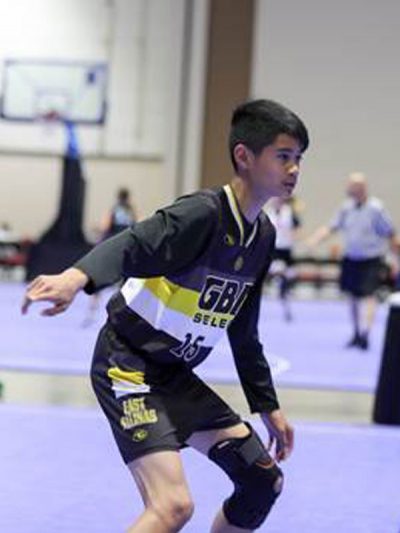 When Nick Duque was 6 years old, his family moved to Salinas. Immediately he was the new kid, in a new school, with no one to talk to.

“I had problems interacting with other kids and was bullied a lot,” he said.

Starting in the fourth grade, Nick would bring his own basketball to school and shoot hoop during recess and lunch — by himself.

Eventually he joined a team … and everything changed.

“Making friends and interacting with other kids my age became easier and the bullying stopped,” he said. “Going through this kind of stuff helped me become a better person and leader.”

Currently in 8th grade at La Paz Middle School in Salinas, the 5-foot-9 point guard is a scoring sensation, averaging 20 points per game last season. He was selected to the Reggie Stephens Foundation Monterey County All Star Team, and has been named scholar athlete the past two years.

His goal next year as a freshman is to make the JV or varsity team at Alisal High School.

“My immediate plan is to take advantage of this off season and improve my skills,” he said. “I feel that since there is a shelter-in-place order in our area, a lot of players my age are not working that hard to get better.”

Nick joined Gil Basketball Academy in the fifth grade, and credits GBA with instilling in him a work ethic. “GBA has taught me to keep working hard to achieve your goals not only in basketball but everyday life,” he said.

To achieve his basketball goals, Nick takes at least 500 shots a day, works on his ball handling drills, runs 3 miles per day wearing an elevation mask, and works out in his family’s home gym.

“Another goal of mine is to be a good big brother and to support my younger brother with anything he needs,” he said.

Nick’s 2-year-old brother was recently diagnosed with autism. “I hope I can make a difference no matter how big or how small,” he said.

Nick believes that playing basketball and being part of a team has helped him become a better person.

“With basketball you learn early on how to interact and work together with others,” he said. “It also gives me the incentive to get good grades.”

Nick’s goal is to attend a four-year university and play basketball. “My ultimate goal is to become a doctor,” he said.

He hopes the sport continues to open up doors for him.

“Without basketball I’m not sure what I would be doing,” he said. “I have met a lot of people and obtained the discipline to stay away from anyone that may be a bad influence.”

Nick credits GBA with instilling in him certain traits — among them, leadership, respect, courage and selflessness.

“Being part of the GBA family has taught me to keep working hard to achieve my goals, not only in basketball but everyday life,” he said.